The IELTS Academic Writing Task 1 is all about writing a 150-word (minimum) summary of a table, graph (pie chart, bar, or line graph), chart, or procedure. The IELTS academic writing task 1 samples in this article will show you how to report core features and describe/compare information while identifying major trends or significant aspects. Some things to remember are-

While looking at the sample answers, you should consider the below-mentioned aspects:

You will be given one of the following types of questions for IELTS writing task 1 to complete within the allotted time:

The aspirant needs to write a small report penning down the core features in the given graph that they observe. You will find the same if you analyze the IELTS writing task 1 academic for band 9 samples. You may have to summarize information, describe the stages in any process, explain the functioning of something and outline any event or object. The question format will involve a brief description of the chart or table, followed by the instructions for candidates and then the actual picture for them to follow.

You will have to summarize the information as per the question’s instructions, followed by identifying and describing the main components and drawing comparisons wherever necessary.

Here’s taking a look at the common types of questions that you will find in the IELTS writing task 1:

Multiple Graphs- Questions with multiple graphs have several kinds of diagrams and are common in the examination. They will mostly have two diagrams like a combination of line graphs and bar charts or tables and pie charts.  A question could be- The diagrams below provide information on bicycle use in Alberta. You will have to summarize, select and report key features and also compare wherever necessary.

Here are a few samples that will help you get the idea. 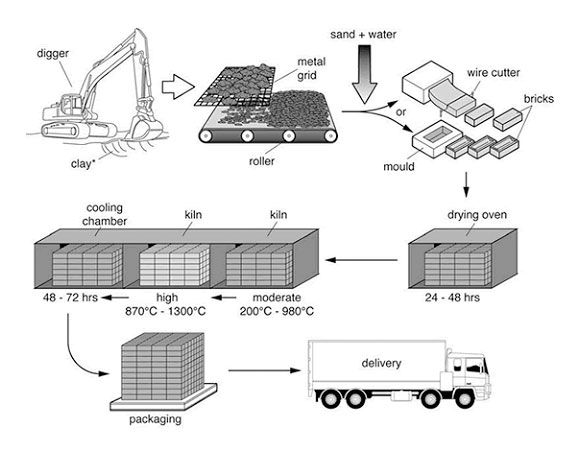 This diagram explains the process of manufacturing bricks for the construction and development sectors. There are seven stages of manufacturing, beginning with digging up clay and culminating with the final delivery.

The brick-making process starts with a big digger being employed for digging up clay from the ground. It is placed on a metal grid for breaking it up into smaller parts. A roller helps with this part of the process.

After the metal grid, the clay gets infused with water and sand. The mixture is then converted to bricks with the help of a wire cutter or mould. After that, they are put to dry for 24-84 hours in the oven.

In the fifth stage, the bricks undergo heating and cooling. They are heated in the kiln at temperatures ranging from moderate (200-980 degrees C) to high (870-1300 degrees C). Then they are put in the cooling chamber for 48-72 hours. Once the process is completed, the bricks are packaged and delivered to customers.

Given below is a map of Albuquerque city. The city designers and authorities have decided to develop a new shopping and retail mall for the city, and two sites, S1 and S2, have been proposed likewise. 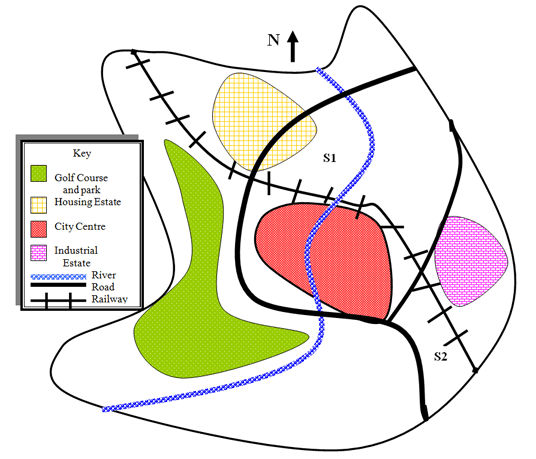 S1 is the first proposed site for the shopping mall in Albuquerque and lies northwards from the city center on the map. It is positioned over the railway line that connects the north-western and south-eastern parts of Albuquerque. If developed here, it will be close to a major housing estate, offering more accessibility and amenities to those residing in the city center and the estate. It will also lie adjacent to the river that goes through the city.

The second proposed site, or S2, lies beside the railway line and is closer to the industrial estate. The main road is close to both the proposed sites, offering easy connectivity for residents. A park and a golf course lie towards the western end of the city, and no sites are possible in the area as a result.

The table shows Proportions of Pupils attending Four Secondary School Types between 2010 and 2020.

Summarize the information by choosing and reporting the key features and make comparisons where relevant.

The table shows the percentage of school pupils attending four unique secondary school types between 2010 and 2020. Attendance in the community schools has seen a consistent and considerable increase over a decade, while others have seen a marginal increase or decline.

However, community schools successfully increased attendance figures by 47% in this period. Attendance grew from 15% to 37% in the first five years, peaking at 62% in 2020. While these schools initially had abysmal attendance figures, they surpassed more than half of the total pupils in the decade.

The two pie charts showcase results from a survey on boys' and girls' leisure and cultural activities, including reading, computer games, sports, and dancing/music.

According to the survey results, both boys and girls enjoy listening to music, although more girls enjoy reading than boys. There are many differences concerning preferences for sporting activities.

Boys enjoy computer games more than girls with a 34% rate of participation compared to 16% for the latter. Basketball is the next popular activity (26% take part) followed by soccer which 17% participate in. Skateboarding and listening to music are enjoyable for 11% and 10% of boys respectively. Reading is the least popular activity amongst the boys, with only 2% preferring it.

The second chart shows that girls mostly enjoy dancing (a participation rate of 27%), with reading (21%) and computer games (16%) being other popular activities. 15% of girls enjoy participating in netball, while 11% participate in gymnastics. 10% also enjoy listening to music, which is similar to the figures on the first chart.

Study in Canada & Save up to 20 Lakhs with upGrad Abroad

Study in Australia & Save up to 20 Lakhs with upGrad Abroad

Study in Germany & Save up to 20 Lakhs with upGrad Abroad

Study in Ireland & Save up to 20 Lakhs with upGrad Abroad

Study in UK & Save up to 20 Lakhs with upGrad Abroad